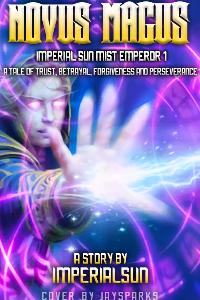 The story of twenty teens from diverse backgrounds and with varying long terms aspirations united by one goal-- to attend Nine Petal Academy, one of the most prestigious magical academies in the land. They must all leave their countries of origin and undertake the journey to Kyuu Seishin-- a nation which has long clashed wands with their own.
Among these twenty is a young man called Lei Lan-- a wind and lightning mage with a strange power of unknown origin. He aspires to become Magus Maximus, the one herald as the strongest mage in all the universe. A goal which is made difficult by what in his world is deemed as an unusual sickness. Despite this, Lei is determined to achieve it, even if it means pushing himself to the brink of death.
Embark on a world unlike any other. Novus Magus is an original light novel and is the first book in the Immortal Sun Mist Emperor Saga.