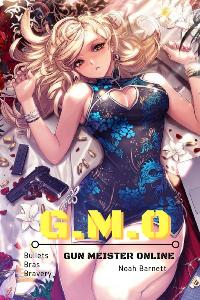 Gun Meister Online is a new and exciting Virtual-Reality Combat Simulator. Players assume the role of Meister; fighting and ranking up into new and higher divisions. Within the game, weapons take on human shape. These NPC’s use a new Dynamic Distributed Personality System recently implemented, and many are excited by how life like the AI characters are becoming.

Charlie has only just begun to play, and he stumbles and struggles with the matches. Slowly he grows as a Meister, and at the same time, starts to take charge of his real-life outside. Charlie finds friendship among a group of erratic misfits, along with an arsenal of beautiful weapons. Follow along on his adrenaline filled adventure. One that may decide the fate of a world.

Online experience may vary from person to person. Gun Meister is rated [Mature] and only those eighteen or older are allowed to enter a world of guns, violence, profanity, fast cars, pretty girls, and a hot mess of sexual content. Have we mentioned harems, yet? Every Meister gets one.