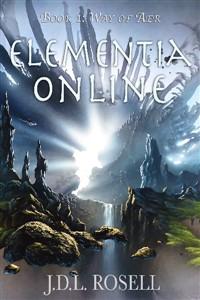 Garrett, a thirteen-year-old with cystic fibrosis, is tired of laboring just to survive. And his fourteen-year-old sister, Nelly, is tired of watching him struggle. So when he gets slated for a lung transplant, Nelly offers Garrett the chance to jump into Elementia Online, despite it being dangerous for his health. He leaps at it. He’s always dreamed of entering Elementia, and with the looming operation, he’s finally ready to take the risk.
He’s ready to be a Drifter.
Entering the game world is everything Garrett dreamed it would be. As a Drifter, he can jump so high it almost feels like flying. He can bend the wind to his will and work magic of the sky, including calling lightning and storm clouds. And best of all, he can breathe. He soaks it all in. He finally feels that here in Elementia, he can become the person he’s always known he is.
But time's running out for him in real life. The operation looms, and Garrett feels like he's only just getting started. So when he hears that there might be the possibility to jump into Elementia Online forever, he can't help but seek it out...
For fans of Avatar: The Last Airbender and Final Fantasy!