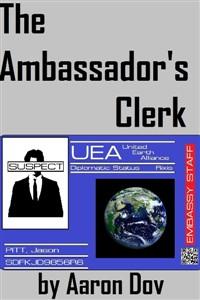 Too clever by half!
Jason Pitt is the Chief Clerk for Earth's ambassador to Rixis. His boss is an idiot, and he pretty much runs the embassy on his own. He attends high class diplomatic parties, ambassadors from across the galaxy call him a friend, and he's having an affair with the boss's wife. So yeah, good deal!
Unfortunately, Jason knows far less than he thinks he does. The boss's teenage daughter is sneaking out at night, an Earth Intelligence agent is poking around, and even his friend Dii, the gossip-mongering Ootooroo ambassador, is starting to get nervous.
All Jason has is a business card. "Gozemar: Procurer of rare items and services." Too bad nobody seems to know who Gozemar is, or what Gozemar wants. What Jason doesn't know really can hurt him, and what he's slowly stumbling across is likely to do a whole lot more than just hurt.
The third novel from Aaron Dov, author of The Madman's Clock and Jovan's Gaze, The Ambassador's Clerk is a humorous look at diplomacy on a planet where nothing much happens... until everything bad happens at once.