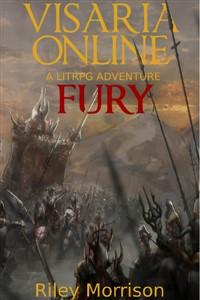 Welcome to Visaria Online, humanities home in exile.
Robbie and his girlfriend, Abby fight in PVP Battle Royales to gain xp, loot and fame. They are the best team out there, slaying their player adversaries without mercy.
Then the female leader of one of the most feared mercenary companies comes knocking on their door and gives them an offer they can’t refuse. Cytheria is as hard as they come, and she wants to profit from the coming war between Visaria’s two main factions and thinks Robbie and Abby should join her.
Taking Cytheria up on her offer, they go off to fight, completing quests, killing their enemies, and finding out both of them are in way over their heads. For the two factions of Visaria Online aren’t the only ones seeking world domination…

This is a side book to Visaria Online: Exile but DOES NOT require knowledge of the main series to enjoy.