Nights of Sambria: And the Wish of Light 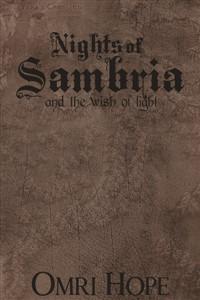 “I discovered a secret. One I desperately wish could have stayed hidden. It was locked away, concealed in a fantastical world on the doorstep of 7 billion people who stayed utterly oblivious to it. If they will be spared the terror that is coming, I can’t begin to imagine.
Know that a forgotten heritage of a dwindling people whispered, unknowingly sending a call to the ancient mysteries of the world.
Something listened.
And now events are set in motion that could force the earth on a course of terrible change. I am being hunted and have run out of time.
There were no stories about it. No legends. Not even scribbles. Yet, the threat of it is real and that’s why I’m writing this warning with shaking hands. So pay attention those who read this, be careful of what lies waiting cloaked in the darkness. That which made their home the lost places of this world.”
She folded the letter with a shuddering breath and stared back in the direction from where the noise reverberated through the halls. It was of stone doors shattering one by one. The chances of getting out safely were all but gone. The letter in her hand was all warning they would have. It dropped into one of the Wells and all that could be done now was hope it was found in time, if at all.

--
This was my very first large story. ;) I started writing it years ago. Was fun, was difficult, but in the end, it is a story I hope that will inspire.
The prologue is in first person perspective and the rest of the story in 3d. Just a little heads-up :P It is a fantasy epic with a contemporary twist for the start.

The story follows Calin, a young orphan in search of answers. But, the answers he seeks will change his life and that of his friends forever, for the secrets that caused his situation have far greater ramifications than the small village of Lamb's Crest could have known.