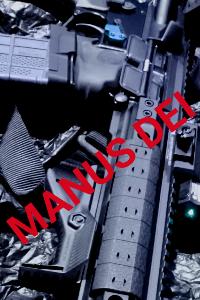 Manus Dei. The Hand of God.
Compassion and kindness coupled with just and righteous judgement.
The Seals of the Apocalypse are being opened one by one.
Now, Hell is on Earth. The balance for the Final Battle is starting to tilt in favor of the Infernal Realms.
For some members of the legions of the Heavenly Host, the situation is intolerable. Not to act is to lose to the Enemy the Creator's divine spark as gifted to men. Not to act is to hasten humanity's descent to Hell.
But to act is to accept voluntary exile on Earth and lose the grace of angelic divinity. For a few, both the chance to delay the Enemy and give time for humanity to gain salvation are worth the sacrifice.
This is their story.

IMPORTANT NOTICE
No disrespect is meant to any religion, military unit, government or offically not-a-government agency, black ops group, corporation, sinister cabal, or any other person or entity, whether known or still secret. This is but a work of literary fiction and imagination.