World of Mary Sue, But I'm not Mary 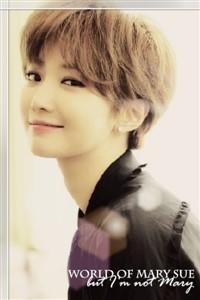 Jesse (man) died only to be transmigrated as Feng Mian (woman), in a world ran by Mary Sue.
Fortunately, he doesn't need to dress up as a woman, because he is recognized as a man in the entire D City and no one doubts this! Gotta thank the greedy father (throws him in jail) and thank the Mary Sue of a step-sister (x2 Slaps the green tea bitch), then earn money every day!!
Money runs the world after all. Then how about Mary Sue's harem? And a couple of gay guys so into him?
• • •
A certain Emperor reluctantly asked, 『Do you have someone in your heart?』
Feng Mian 『Sir Money.』
• • •
A certain Emperor had fallen! 『Mian... I seem to be 'rotten'.』
Feng Mian 『I know you are rotten.』 Only, (s)he misunderstood his question.
• • •
[Excerpt] Rotten - rotten girl (fujoshi); rotten boy (fudanshi)
Note:► The protagonist, Jesse (Feng Mian), thinks and acts like a man. His values from the last lifetime have not changed. He was straight until in later chapters.► There are BL couples, hence the tags.