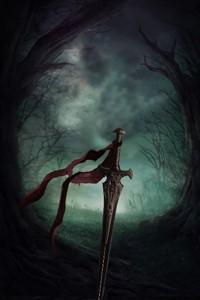 After the death of Luke Callahan's father he finds records of his family history. Luke decides to try and unravel some of the mystery before he needs to go back to school. Using standing stones in Ireland near an old family plot he finds himself in a new world.

On planet Ailar Luke finds himself in front of a dead body and unsure what he had stepped into. Luke knows he must escape, but as an ex military aircraft mechanic he will need to find new ways to survive. Luke also finds out more about his lineage and why if anyone found out he would be hunted to death or used.

Alright so I am not the best at the blurb. Magic is a big driving force in the world. Nearly the entire world is driven by zivat, the magic that is in everyones blood. Giving up some zivatis the way most magical items work. The world is also filled with many different types of creatures and subhumans. I have finally outlined at least enough for the first book and will try and update at least every two days. I put down tags like sex and gore because they will most likely be part of the story. Also I have tried to research enough that if you look into some details you will find some hidden knowledge, like where Luke's family come from.