Man With a Mace 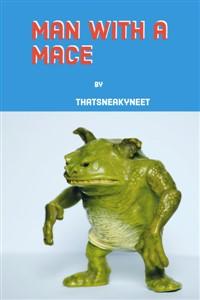 Life sucks, and then you die. And then it gets worse.
Pritchard was the only weeaboo at his Tennessee high school, and was little else, until the night before graduation. Just as he confesses to the girl he's had a crush on for years, Pritchard dies in an act of God and finds himself in a fantastical new world with his crush, drawn into the service of the Dark Lord to purge all Good from the land.
Of course, now he's a goblin. And a cleric. And Sasha's a half-orc barbarian. And by "drawn into the service of the Dark Lord" I mean his crush was, and Pritchard just happened to be pulled along by accident. The girl's actually a bit of a bitch, and doesn't care if Pritchard rots in the sand mines or not.
But even for a goblin slave, things can get better. The Dark Lord was kind enough to give Pritchard a Hero Core, and Pritchard is nothing if not a minmaxing bastard.