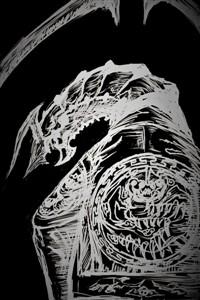 What would you do if you were to turn into a character in the game?After seventy years of dedicating himself to a game, Donegal is finally preparing himself for service termination of Dungeons&Beyond.He spends the final twenty-four hours into the game, clearing every last dungeons before the termination.Right before the termination, he decides the final moment should be as perfect as possible and transport himself to Mount Altum, his favorite map in the game.Upon the final moment, he realized he was transported to Altum for some reason, and that he was no longer a human, but an Overmind - his own game avatar.Soon he realized that this wasn't Altum, and was Alps - he wasn't teleported to the game world.However, soon he discovers that there are secrets and mysteries of his own world which rivals the game quests.But a single question still remains as he explores the new world:"Just... how powerful am I?"Release Schedule: (May change in the future)A chapter per week, will be released on every Tuesday.

Please Check out my Patreon Site and Win Exclusive Rewards at:
https://www.patreon.com/user?u=10728557