Scum of Humanity and his Youth 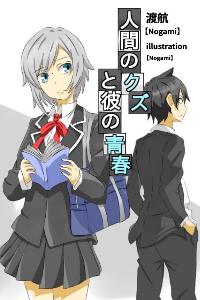 Hiraoka Hiroshi is a cynical highschool student who refuse to change. To him,changing is the same as admitting defeat to society's defected system. But when he turns in an essay that shows this exact same view, he is then forced to start a club with a person of simillar traits, a kind of club that helps other troubled children such as theirselves to deal with their problems. How will Hiroshi deal with this dilema?