The Court of Souls? 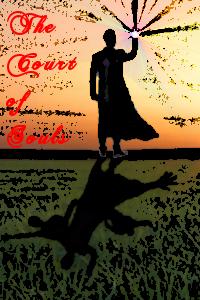 What do we talk about tonight?
~“How about a story?”~
Fine by me. Which story? Hopefully a good one.
~“There was once a lonely child in a world filled with myths, gods and demons. Only power counted there and the weak were worse than cattle. A world where survival of the fittest ruled.”~
Was it strong then?
~“No, but the child had a power. One that made him stand between light and darkness. Nothing could escape him, so he was shunned by his people.”~
What did he do? Did he fight his fate? Did he hide his power? What was it?
~“Oh, he fought. He fought a lot. And no thing could escape his power. It was something that everyone had to live with.”~
So he became a hero and changed the world?
~“…”~
Tell me.
~“Nooo, that's not how the story goes. This isn't a story of a noble man, doing good amidst a sea of monsters. This is a story of a demon who was... kinder than the rest.”~
A kind demon? How boring.
~“I think it would be better if I tell the story, so you can judge for yourself.”~
So tell the story!