Guardians of Midgard: The Legend Begins 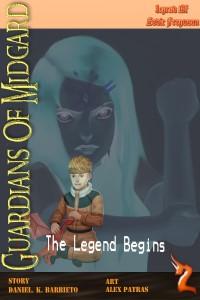 Synopsis: The final day of the school year could not have ended any worse for Eddie Ferguson. His world will forever be changed for the worse when he was ambushed and abducted by goblins and a powerful sorcerer that has put parts of Michigan under a hypnotic and slumber spell. Cassandra and Woden the Wanderer; a famous ancient wizard from the old ages rescues Eddie. Not too long afterwards, Eddie learns that his mother is more than just a normal widowed homemaker and that he carries within himself one of the Six Elder Dragons. Blackhaven, an evil rogue guild pursues Eddie throughout the universe of the world tree Yggdrasil. They are a faction that is tracking and hunting elder dragons. They will never stop and use any means necessary to achieve their goal. To survive, Eddie must endure hardship and many obstacles. Concepts: The book series is influenced by and based off the Naruto manga (Japanese comic) written and illustrated by Masashi Kishimoto set in an Alternate Universe set in a Norse Mythology, European Mythology and Modern Age crossover fantasy. The setting is from a crossover between Norse and European mythology. Other concepts? The series will be the third or fourth generation between tales of Orcs versus Humans, started nearly a century ago by author J.R.R. Tolkien.