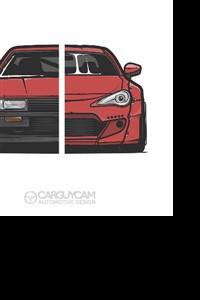 Zoey works as a delivery driver for Piggee's Pizza. She's the fastest on the street, and despite not yet being fully licenced by Australian law, she's her boss' biggest money-maker.
She's lucky enough to own a Toyota Corolla Levin AE86, even if she doesn't relly know what that means. Her car is famous thanks to an anime, and one of the show's fans is completely obsessed with her car... and will go to some pretty serious lengths to get it.
Combined with the stresses of the increasing demands of her job, her biggest work rival losing his own ride, and the police breathing down her neck, it's going to be tough for the energy drink-addicted hyperactive 19-year-old to make it through the week.(Temporary cover photo from: CarGuyCam Automotive Design)