Thaellis A Kingdom Down Under 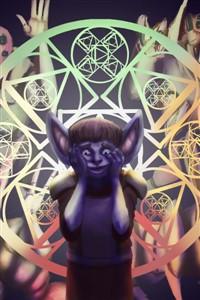 A kingdom down under, once it had prospered, expanded, built, and conquered until all that they thought of worth was theirs. Peace ruled for a time the people absorbed in their own self-satisfaction. But eventually old urges returned. Conquest called though this time there was no outside outlet to turn it towards. So in ages so long and distance the memories most couldn’t recall, the kingdom turn upon itself. War raged for many years, no one coming close to being considered a victor, it appeared that this self-destruction would go on till nothing was left.
Many if given the chance would have claimed that would have been a mercy for this kingdom and its people. For as they killed, and butchered each other over things they already had. Vibrations travelled through rock and stone guiding things best left alone. Creatures came, things of horror armed to the teeth with claws, fangs and armor. Cities fell, and were consumed not even the bones of individuals remained, for these creatures hunger knew no limits, had no end. The kingdom railed together once more, what was left, they fought, and fought but their Nightmare had no end. Their greatest, brightest minds worked their magic, carved into stone. Wards they were called them, this would keep their Nightmares at bay. They abandoned attempts to fight and focused on walling every surface of the kingdom with these Wards. It work mostly, an illusion of peace returned, one often to crumbling, but it was better than before, it was a bearable hell now.
So here we start our story as ages have past for a walled off kingdom, hunted by a never ending Nightmare. With a poor but deserving soul born into this world.