A Step Behind Death 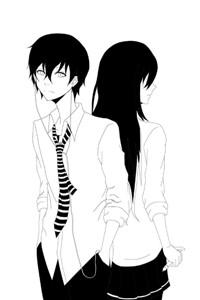 I began to panic. Before I knew it I was slowly pacing backward trying to reach the door and hopefully make a run for it.
“Oh I wouldn’t do that if I were you, unless you’re interested in seeing the only thing that’s worse than death,” After threatening me with an equally intimidating voice she began reaching for something in her pocket, something that looked like a pen. She continued her threat, “Nothing.” and with the click of the pen she began pacing towards me.
I know a lot of things, I read many books, listened to many lectures, answered many academic questions. I was good at it. I became one of the best students in my class because I was good. However, I failed to notice something crucial in the situation I ended up in. I never once thought that maybe, just maybe, this girl right in front of me holding a pen might be legitimately crazy.
At this moment, I think she is.

The cover art is made by friend of mine.
I plan on making this novel into a webtoon once it becomes the best it can be.
For now, I'll be willing to listen to any criticism.