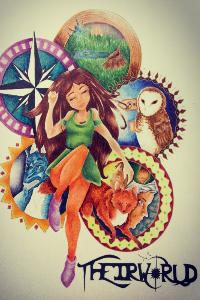 An adventurous young human woman moves to the academic floating continent ‘Enclave’ to experience a different way of life and escape her mundane reality.
There, she holds a teaching fellowship at a university, where she teaches English Language and Earthian Literature classes, and tries to fullfil the expectations of being a representative of Earth while staying as far off the radar as she can.
However, she quickly discovers that life on The Enclave is no different than her life on Earth had been – with a few exceptions; but she chooses not to dwell on those. After spending a couple of months burying herself in work, culture, news, and her other extracurricular activities, she turns to a popular new video game called TheirWorld to relax and pass the time.
In the game, she happily plays by herself and with friends, using the game as a way to speak with her family on Earth as well as get to know people she lives and works with on The Enclave. As she is drawn deeper and deeper into the game, however, she begins to realize that her in-game life is far more connected to the happenings of reality than she could have imagined and she falls into a conspiracy that threatens her life and the lives of the people around her.