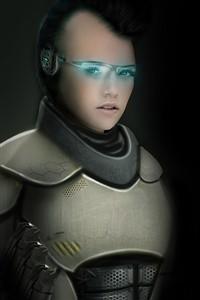 21-year-old Jackson Marmy knows how to play golf, make pleasant conversation, and wear fashionable clothes. All in all, he has a good life, and his only purpose is to dazzle trade emissaries with the glory that is Earth. So, it really comes to him as a surprise, when he is sent to Murario, a mining colony, to negotiate a trade agreement. Something doesn’t sit well with him about this mission, especially the fact that his protection is entrusted to a bodyguard who looks like a boy not a day over 16. Despite that he is packed full of weaponry, the guy’s effeminate features don’t seem to qualify him for his line of business.
Dana Drake is pretty confident she had never seen a guy more beautiful than Jackson Marmy, but, to her defense, she has never seen an Earthian in flesh and blood before. Although she’s a bit too sure that her weird hair makes her look ugly, she is surprised to get so many mixed signals from the handsome Earthian.
None of them knows what to make of the attraction that they sense happening between them. Between assassination attempts and conspiracies on an interplanetary scale, they don’t have time to set things straight, either.