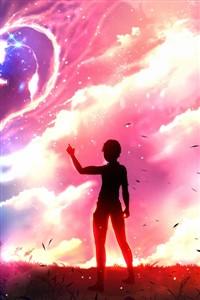 Due to an accident caused by what used to be the largest gaming company in the world, an entire country was wiped with over 10 million lives lost as the result.
A white light illuminated the world during the accident, later allowing people to see things that would only appear in video games such as transparent screens and character stats.
And appearing alongside with the game-like elements are Abyss Fragments, also known as, in game terms, Dungeons.