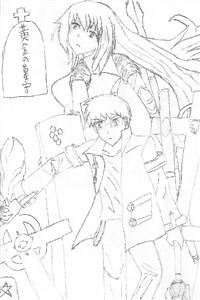 Upon being summoned to another world, a group of bullies attempts to murder their classmate by throwing him off the transportation spell and to his death.

However, Tanaka Tomoyuki finds himself revived as a zombie. Dragging himself from beyond the grave, he returns to the world of the living to exact revenge on all those who bullied and tormented him when he was still alive.

In other words: vengeful EDGELORD to the max...the worst and most cringeworthy story to ever exist on the site. Cardboard, 2D villain characters with no depth at all whose sole purpose is to exist as antagonists to be beaten up by the vengeful protagonist. And the protagonist somehow isn't bitter and edgy enough because of his lame jokes and he's the typical spineless beta male...whatever that means because it's such a bullshit term coined by so-called alpha males who think there's only one way to be "masculine".