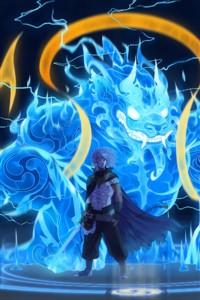 This is a story about Shad, a young orphan who was struck by lightning. Instead of dying, he was reborn into another world known as Eidrin. The ambient mana on Eidrin is extremely dense and abundant, allowing mages to reign supreme over the rest of the populace. Follow Shad as he develops the strength to survive in this new world and reaches heights thought to be unattainable for mortals, all in a quest to learn the truth behind his reincarnation and the purple lightning that resides in his soul.