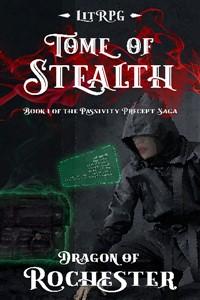 Time of Stealth is written by the author of Cold Steel Dig. This novel a LitRPG fantasy adventure with action, romance, a different kind of prison break and a heist.
Grace has a no good con-man uncle that always leaves her in charge of actually paying for their lodgings and food. This forces her to come up with creative ways in making up for what she can’t earn from her waitressing job, like playing games online and selling fat loot for real cash. The day before she turns eighteen and frees herself from her uncle, the Passivity Precept takes over the world, and snuffs out all brutality, leaving only its MMO-like violence simulator. Knowing how much she can make from an MMO, Grace enters the sim and discovers that it's more than just a game. Somewhere in the violence simulator are the answers to who started the fire that killed her father and made her life hell for the past five years.
For far too long, Lore has been stuck in the simulator as the Ravenborn clan’s free-roaming prisoner. They’ve held a grudge against his clan and have taken their hatred out on him. Having planned his escape for over three years, he has everything ready, but he needs a specific artifact from the Rogues Guild. They’ll only give it to him if he finds and copies the financial records of a well-respected member of elven society, ledgers that are in a secret location that just might be impossible to break into.
Will Grace find her answers? Will Lore gain his freedom? Can these two unlikely people, both alien to each other, find common ground and work together?
Updates every Monday and Wednesday between 3-6 PST.