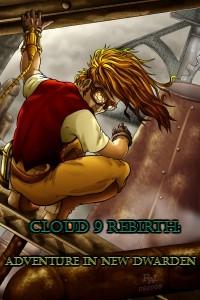 When a bloody catastrophe strikes a young boy's home, desperation brings about an unknown terrifying visitor. Plagued with gut-wrenching fear and an oncoming spiral into madness, comes the boy's only hope of survival. Glistened with opportunity, comes the alluring enigma rushing to make a deal worth several lifetimes.
"Simply put, I have a favor to ask." It asked ominously
"I have a baby here who is very very ill." It's voice descending violently into the boy's ear.
"The illness is beyond my withering grasp but you can heal him child! You can protect this sickly baby! I know I wouldn't want to..." Continued the enigma with sinister delight.
Innocently playing into the unknown visitor's alluring hand, the boy agrees to a desperate deal ripe with adventure and is sent to the mysterious massive city of New Dwarden. Faced with outrageously colorful characters, towering and strange animal life, and even talking frogs-lemur's, the boy must adapt to grand adventure to complete the impossible task given to him by the Enigma.
Join me Frankie, as I guide you through the original tale of Cloud 9 Rebirth: Adventure In New Dwarden!
Primarily Inspired by: Hayao Miyazaki (Studio Ghibli)
Dedicated Humbly To: D-Ward
Special Thanks: Erick M. Justin C. Mauricio L. Liam G.
Very Loosely Based Off The Life Of: Frankie S.

Cover by: castrotroy3497 on Deviant Art