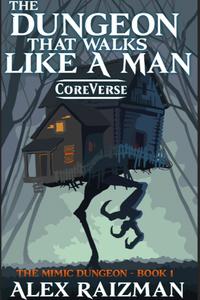 The Dungeon System is breaking. Now the mutant cores will rise.
Zaria was just a normal woman, living a simple life, right up until demons burst down her door and ate her heart. Normally that would be the end of the story, but Zaria was reborn as a dungeon core. Except nothing is normal for her.
Due to instability throughout the universe, Dungeon Core generation is experiencing some unique bugs and glitches. Most of these mutant cores just explode after only a few hours of life. Zaria is one of those cores.
Luckily for her, there’s a way to prevent her detonation - she must find and form a bond with a human witch to create a striga. Only then will she be stable enough to survive. Normally, this would be a death sentence anyway, but Zaria’s mutation gives her an ability no other dungeon core has had before:
Legs.
Now a walking house, Zaria sets off to find her striga, fight demons and monsters, build up a dungeon worthy of being run by the greatest heroes in the lands…and feed the insatiable appetite of her mimic mobs.
Life sure isn’t simple anymore.