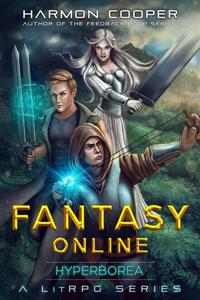 Nineteen-year-old Ryuk Matsuzaki and his best friend Tamana decide to start over with new avatars. When Tamana is suddenly killed right in front of him in a Tokyo subway, Ryuk knows there is only one place he can search for answers –Tritania, the world’s most popular online fantasy world. Standing in his way are a mysterious guild known as the Shinigami, and his older brother, a Yakuza crime lord hell-bent on squashing his dreams.

As a lowly ballistics mage, Ryuk must quickly recruit guild members, level up, loot and shoot his way across Tritania to discover the dark and sinister secret behind Tamana’s untimely death. Joining him in his quest are a famous Swedish gamer, a powerful half-dragon half-human female assassin, and a devious ax-wielding goblin.

Get started on this action-packed, coming of age LitRPG saga from the author of The Feedback Loop series now!