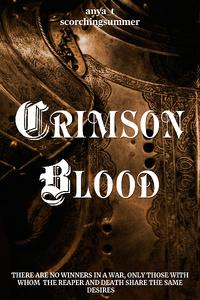 After having fought on the frontlines of the Imperial War for three years, Crow Burnham, better known as the Crimson Captain, leader of the 11th Western Battalion, was betrayed by her unit, barely escaping alive from them before her most hated enemy, Captain Hades Bennetti of the 8th Eastern Battalion, found her and saved her, repaying the favor she did him months ago.
Now, Burnham would do anything to assure her vengeance, even if that meant associating herself with the Bennetti, the man she sought every time on the battlefield for a chance to reap his life. Crow would stop at nothing to ensure every single person who stabbed her in the back received their payback.
And Hades Bennetti, who had helped his enemy against all sense in the world, risking his battalion safety and his own sanity, would use Burnham as much as she would use him, and, at no cost, would he stop before he had taken the Western Kingdom down. They would both achieve their goals even if their lives had to be laid in order to do so.
The two enemy captains were prepared for whatever would be thrown in front of them — they wouldn’t hesitate to take it down if it got in the way of what they are aiming for. But will they be able to keep their personal feelings separated from their original goals? Can they allow themselves to cross the thin line between hate and love for the person they swore to kill?