Getting Hard (Rise of a Tank) 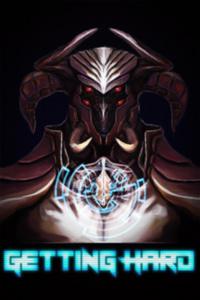 Herald Stone always built tank characters in every MMORPG he played. To be unkillable—that was his first Goal, a simple childhood dream. However, the turbulent realities of life put an end to his gaming days.
Years passed, and Herald Stone, now having attained success and stability, was presented with the opportunity to redeem himself...to fulfill his first Goal. Trivial? Childish? Others might think so. But Herald Stone always fulfilled his Goals—every single one. No matter what. Immortality beckoned in Mother Core Online, and this time Herald Stone would answer.
Choosing a long-forgotten race, hidden away in an unknown region, the rise of an immortal tank begins. This is the tale of Herald Stone Getting Hard.

In a reboot of Getting Hard (Old Version), I return to one of my stories after five years. For those not familiar, the main character here is far from the typical in LitRPGs, or web novels as a whole, and is arguably the pillar that carried the story. This time around, I will apply my experiences and learnings writing REND to make the characterization even better. Perhaps lacking in the original, expect a different take on the LitRPG system, including strategies involving skill builds and synergies that steadily become more complex while remaining understandable and do not involve heavy use of numbers. Aspects of the real world are also shown, such as the evolving technology, how the VR world affects society, and the like.
As the synopsis hints at, this is story is more on the comedic side with serious undertones, mainly focused on the shenanigans of Herald Stone on his way to building an immortal tank. And while this is under VRMMORPG, a sub-genre of LitRPG that seems to have fallen out of trend at present, this story couldn't work if it was in any other setting. Prepare yourself for a very different, yet somehow familiar LitRPG novel.
Cover by me, when I still knew how to draw years ago.
Also published on Scribblehub.