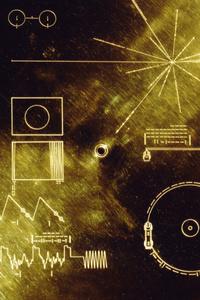 ET: IrrelevantEL: Irrelevant
A monolith of black steel, frozen in time and frozen in space. A dome, held in place by four legs attached to the structure. And four prongs, all aimed at a point in space, directly above the tip. Created long ago by a civilization, now gone.
The simple, imposing structure had one purpose: the continuation of a legacy. Indeterminable amounts of time passed; a stasis, one eternal.
Until it wasn't.
Silently, it vibrated. The intensity increased, and halted. The tip of the monolith folded inwards.
Blindingly bright, a flash of light, composed of all hues and wavelengths, illuminated the empty surroundings. Light, a relic of ancient times, had made its final appearance.
Each prong projected outwards a thin line of light, converging upon the point. And from the tip of the monolith, a thicker beam flew. The five converged upon the same point, and continued their paths- until they hit the dome. The light reflected immediately back, reversing the directions entirely, passing through the same point, and were on course to hit that which emitted them. And moments before they did, all five emitters flashed again, each burst of light more powerful than the previous five combined. And the prongs were melted, from the returning light and leaving light; only the monolith was left unstained.
As all five converged, space tore. Light returned, and the rupture grew.
The energy pierced the universe, and the one after that. From the hole, a energy that had never existed came. It did not interfere.
And a device plunged through the hole in the fabric.
The accumulation of the final, desperate years of life, it advanced.
A relic of a long-gone civilization, it advanced.
Through the tear created by the last star, it advanced.
Unwitnessed by all, for the lack of any.
The Golden Record forged ahead, to depths unknown.