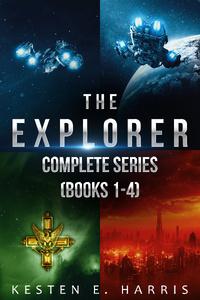 The Explorer Saga is also available on Amazon.
A race of violent aliens known as the Aggressive Intellectuals have been at war with humanity for over 400 years, but Wander Locke's never given the conflict much thought. Not until it claimed his parents. His sister's body was never recovered, leaving him to believe that she's still out there somewhere.
He's made it his personal mission to find her and bring her home. A mission supported by the President of the First Division, who tasks him with retrieving an experimental shield generator from a mysterious group of rebels.
What was meant to be a simple task evolves into a life-changing fight as Wander discovers that the galaxy has as many secrets as it does stars. He's not just searching for his sister anymore, he's looking for answers about his family, his enemies, and himself.