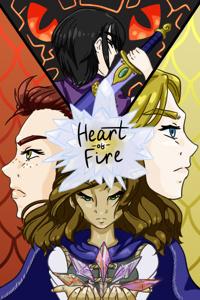 Five stones, two estranged siblings, one ex-fiance, and not one spark to protect herself.
Syra is the firstborn heir to the Montari Dragon Clan. She is also a flameless runt--a fact her younger siblings, Cassius and Petra, often repeat. But, she is also a Lightblood. Blessed with high affinity to the land's mana flow, her magical prowess is her one redeeming quality. But when the Ignis dragon, Marrak, attacks the neighboring human kingdom and kills her father, it is her trademark skill that provides hope: shapeshifting.
Nine years after she infiltrated the human city, Marrak resurfaces. With her cover blown, she's sent into foreign lands to hunt down five powerful crystals and stop him from rebuilding the weapon that would leave him invincible, and both human and dragon lands destroyed.
But war is brewing in the human kingdom. Social unrest is shaking every city and the web of rebellion is on the hunt for Lightbloods, making her a glowing target. Enemy ears are everywhere and secrets run deep, even in the people closest to her. And as a wyrmling who can't breathe fire, she is left with bickering twins and a bitter prince in a world where monsters don't always wear scales.
Contains depictions of: PTSD, substance abuse, child abuse