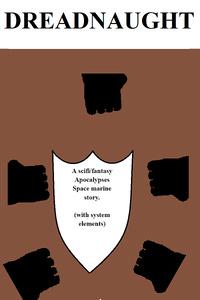 The year is 2044, as you might imagine technology has advanced. People are people. And the world economy is still in shambles. America experienced a full financial collapse about a decade before. Riots, rebalance, and redistribution. David was 13 when the protest massacre occurred when his mother died.
Of course, the world does not rotate around a teenager. Four years of business college and two good friends and a dream of developing real power armor just to cosplay as a space marine. Of course when you got millions and no real drive for anything else after two divorces. You make it happen.
All David had to look forward to was his five minutes of fame as an extra to the next Halo game presentation. They expected him to wear cheap cosplay. Instead, he brought about a million dollars of gear with him.
All David expected was five minutes of fame before he turns into a bachelor shut-in for the rest of his life. Instead, the Universe got an update.
Witness the rise of the Order of the Free Wardens. Witness the rise of the council of races. Witness the legend of the Dreadnaught.

Greetings, I am Zalex. And this is my first ‘Space Marine’ story, Some things I would like to note. All locations, weapons, unit designations, mention of franchises (under the protection of fair use laws), history, and so on is fictitious or used as reference only. Any likeness to real individuals or events or otherwise is merely coincidental.

This novel has excessive language use, mild graphic and suggestive themes, mild alcohol use, and scenes of violence. You have been warned.