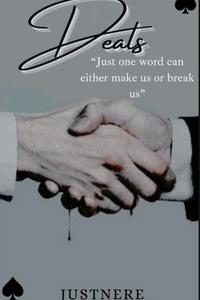 Book one in The Dealer's Series. 'Cause this is the best deal that I have ever made.' Her- "I do what I do for the people I love."Blonde hair, blue eyes, an affinity to make Deals.That's one way to describe a Griffin spawn but when it comes down to Peyton Griffin, she breaks the chain. Known for always putting others before herself and carrying around baggage, Peyton must face her demons. Not only the ones that are out to get her but also the ones that are out for her friends.What happens when everything she has worked for becomes compromised? Him- "Family means everything to me."A baby in a basket, abandoned all his life. It takes sticks to break people but for someone like Caleb Parks, it takes one day to do just that. He's the definition of from rags to riches, but he's still fighting and trying to live for the people who look up to him and not himself.Reality will knock him off the fantasy he has built, but can he face it? Now I can promise you that these two people have nothing in common. Or do they? In a world where Deals rule lives, family will have to come first and sacrifices will have to be made, when one word can change everything. It's a world where all deals matter and one wrong move could either make or break us. What happens when these two polar opposites find out that everything they once knew turned out to be a lie. We shared a knowing look because we both knew that we would both go down either way. 'Deal'