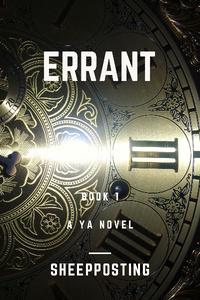 Amateur fighter Kestril only remembers two things about her mother's disappearance: a locket and the promise she made to keep her brother safe. That promise is all she thinks of when she jumps in front of a car to save her brother. She expects death, but instead wakes up to a looming clock tower, cobblestone streets, and dead soldiers wearing lockets just like her mother's. Kess's locket marks her as one of the Errant- people with control over dimensions and time, and the same people rumored to have captured her brother across the city. When a military group mistakes Kess for their enemy, she swears allegiance at gunpoint, hoping to search for her brother from within. Inside, Kess finds an even darker side of the city bent on killing the Errant-using any means necessary. When the murder of an important Errant soldier throws the city further into civil war, Kess uncovers a plot that could undo everything she's fought for so far. The only problem? Her brother is at the head of it. Trapped between her promise to her mother and her morals, Kess finds little use for her theatrical brawling of the past. She can only hope to find her brother before it's too late.
|| Update: 4/24/2022 Have decided to rewrite this novel, but will continue to post chapters of this draft, possibly with commentary. Questions, comments, concerns, and suggestions are welcome. Thanks for supporting me! |||| Story is finished, just getting into a publishing schedule on Royal Road for the first time. ||