The Halls of Death and Time 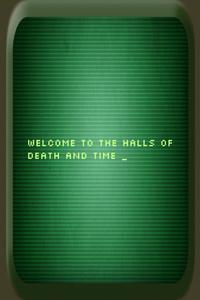 For years, Dr. Robert Cobb—Bob—has been trying to develop a technology to communicate with his comatose son. But it’s not going too well. After millions of dollars and thousands of man hours with nothing to show for it, he’s about ready to pull the plug—literally.
Then one day he stumbles on an old text-based video game. On a whim, he plugs its algorithm into Jack’s integrated system feed called COMM+. The results, to say the least, are completely unexpected.
What follows is a father and son escape adventure through multiple heights and depths, filled with monsters, time loops, politics, underground bunkers, and a snarky cat.
Welcome to “The Halls of Death and Time.”