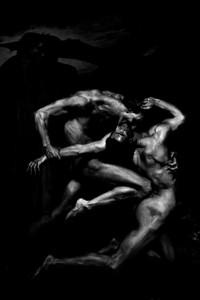 “The world is dying, and the gods are fighting the godless over its destiny – woman or man, king or queen, warrior and slave alike; they will all play their part at the end of the world: until the light takes them.”
In the north, lay the Obsidian Fields hidden in storms of shards.
To the east, lay the City of Slaves beneath the mountain crowned by clouds of sot.
In the south, beyond the ocean lay the frozen realm of gods.
To the west, Lay the Citadel with its high walls thirsting for blood.
Catharsis, from the Greek katharsis meaning; “purification” or “cleaning” is the purgation of emotions – particularly pity and fear – through art or any extreme change in emotion that results in renewal and restoration.
This work is meant as a catharsis.
The seed that was to grow into this beast of a story, I planted many years ago in the fertile meadows of my childhood fantasies, naive and pure – watered with the beautiful lore of Tolkien and his apostles, it sprouted into something promising.
The short chapters make it easy to start reading when you have the time and stop when you don’t anymore. They also create the illusion of a high tempo, which is important for a work of these proportions, so not to make it drag. The limitations on the word count also force me to compress a lot of information into every paragraph; containing hidden meanings that will make sense when combined with later pieces of information.
The non-linear nature of the story will at first be a hurdle of immense proportions to overcome, chaos and confusion will ensue. But as the reader learn more about the lore, places, and inhabitants of the world; the pieces of the puzzle will begin to click into place in a way not possible with other narratives. It might also add value to the rereading experience.
As the observant reader will notice, I constantly, and deliberately bend the rules of language and grammar to the breaking point. I am not doing it out of pretentiousness, but because I believe that it gives the story an archaic, eerie and maybe even visceral atmosphere. Fiction is not so much about conveying information as it is about evoking emotions. Hopefully, it won’t be too distracting and will feel quite natural after a couple of chapters.
Nevertheless, that’s not the important part…
Immanentize the eschaton!
Thank you for reading.