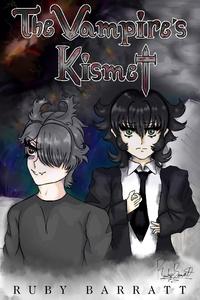 Luke Warm has done his best to live without conflict and avoid unnecessary human interaction at all costs. Not getting involved in other people’s business is his main objective, his purpose in life.

Luke’s fate changes when a strange occurrence in PE class results in him accidentally setting a teacher on fire. After being expelled from Blackember Academy, Luke learns that he is no freak of nature, he is in fact half vampire (he had no idea…).

After a somewhat awkward encounter with his eccentric and often absent father, Luke is sent to the mysterious Bibliotheca Vampiric.

Having no idea what to expect, Luke is accompanied by the aloof Justice Blackember, who tags along despite his proclaimed hatred of vampires. The pair become familiar with a new perspective on their own world, one where companionship is not as straightforward as it seems.

The vampire’s kismet is their livelihood, and this fateful bond proves to be unpredictable…