A Personal Hell for A Winged Killer 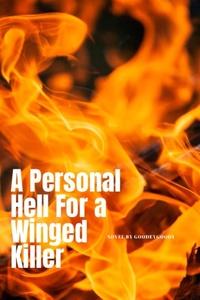 Metam, a super-continent which is divided into 5 different districts, is home to a world of superpowers.
The last known survivor of the sleep clan, Miya, lives in the Capital City of the Eastern District, Hinansho City, or the City of Refuge, and although she has lived for 23 years, she only remembers her life from the moment she had her first day at Eastward Social Academy, a college of mercenaries that ranges across all three cities of the Eastern District.
In school, she meets a group of the strongest students in Eastward who hold her in high regard, teaching her about the history of the world around her and training her in battle techniques so that she can go on missions with them to fight “the Hole.”
Eight Generals lie beneath the Sultan of the Organization, Rigkt of the Curse, as they attempt to establish a new world order, dethroning the reigning Central District Government that controls most districts. To gather her memories, Miya sets out to gain the power to protect her friends so that she can one day take back her memories. ———————————————————————————An underlying evil lurks close to her, bearing wings of pure white and an immortal body. A dead man walking who killed the most powerful alliance in Metam’s history looms around her, grooming her to become powerful.
Her “friends” know much more about her than she thinks; they are not who she thinks they are.