The Secrets We Keep 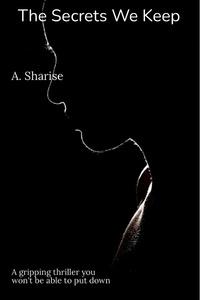 The story begins with the resilient, ex-military intelligence officer Alice Mitchell. She goes by Ally. Years after her father's death, she makes a name for herself after solving his cold case. She believed the police let her father’s homicide case turn cold and forgotten. That wasn’t acceptable to her… Ally started her own investigating business. Pouring all she had left from her father’s police pension; she was able to piece together what the police could not.
Although Ally became popular within her community, she also made a lot of enemies. Especially with the local police. Many of them believed she overstepped her bounds by doing ‘their work’. When her private investigation business opened up, she couldn’t believe how many people wanted her help. Her business quickly became well known throughout the city of Freeside.
One day an unlikely customer come to Ally’s office seeking help. An old childhood friend, Shanti Edwards, who was a profound celebrity status fashion designer. Born and raised in Freeside, she was the daughter of the well known adult club owner Douglas Edwards. Just recently, there was news of Douglas’ death stating it was an alleged suicide. The news made it to the national level, broadcasting all over the country. Shanti however says otherwise… She calms he was murdered and would never take his own life.
Upset and stricken with grief, Shanti returns home and goes straight to see Ally. She wants to hire her to investigate her father’s death. Shanti wants Ally to prove an underground crime organization called the Syndicate killed Douglas Edwards. At first Ally is skeptical, however this assignment perked her curiosity. She was always down for a good challenge. This challenge would be like any other before. This challenge would take her far down a rabbit hole she didn’t even see coming… This would be a matter of life or death for her and everyone around her.