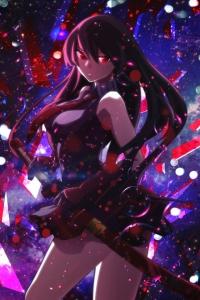 During the beginning, only 4 beings roam the Earth. These beings were called entities, and they watch the Earth for eons. As the earth develop more creatures started to appear. The earliest humans discover these beings and worship them as gods. Curious the entities chose to live amongst the humans and protected them from all danger. Civil war broke out among the gods. A few entities were overcome by greed and wanted to rule the entire world for themselves. The war almost destroy the earth itself, realizing this the entities banished themselves from earth, and made a pact to never directly interfere with the world again. A new entity was born from the corruption that drove the gods into a civil war. The creature slowly corrupted lifeforms around the planet making them give in to their inner demon. The entity was simply called the Demon king. Unable to directly interfere the gods created a weapon that was capable of killing the being. The weapon was called Excalibur only a hero could wield it. After a fierce battle the hero defeated the demon King, but they soon realize that it is capable of coming back. A tradition was created, a champion will be pick to wield Excalibur and fight the reborn Demon lord. Centuries later.. The Demon King always come back and the hero always win but the devastation that the demon lord cause was always too great for the battle to ever be called a victory. Now the demon king is back again and as always the hero is there to stop him, but this time the story is different.