A Dungeon in Space 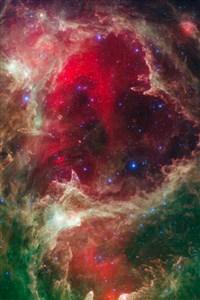 Somewhere in the vastness of space there lies a lonely world orbiting a small lonely star. On this world there lies a country known as the United States of America, and in this country there lives a lonely man. One day this man went to work as usual just like any other day, of his boring and repetitive life. However life had different plans for him that day. As this man was driving to work as per usual, there was another driver who perhaps was not quite paying attention to where he was driving, and unfortunately hit this lonely man, in this lonely world, around the small lonely star. And that was the end of the lonely man’s existence and the beginning of a new one.
Picture Taken By NASA's Spitzer Space Telescope, and is a picture of the Westerhout 5 Nebula.