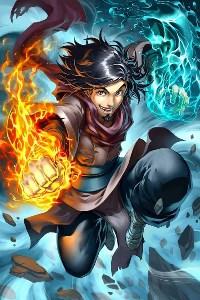 You can try to run from destiny.
Fate will always find you.
Have faith in your path.
Let your dreams guide you.
Dragons and magic had existed long ago, far before the time of language, writing, and even technology in its most basic form. Humans have all but forgotten that magic exists, calling upon technology to do their bidding. Dragons have fallen into legend, becoming nothing more than a fantasy tale that humans used for games and television.
Humanity has long ago set out to explore distant galaxies. The closest galaxy that was reachable is Andromeda, where life has flourished, and new forms of beings and creatures were found to have wildly differing attitudes and cultures similar to that on Earth. Humans had, of course, brought their own traditions, cultures, and technologies from the nearby Milky Way galaxy.
Humanity has long since settled here in Andromeda, but an old untapped potential had been discovered at the turn of the millennium, and once again mankind managed to uncover the long-lost arts of magic.
Research in combining magic and technology has led to massive discoveries that science can indeed explain the overwhelming power of magic in specific areas and can even enhance it with unique augmentations. During this time of scientific and magical discovery, rumors of massive dragons and humanoids with wings began to sprout up across the galaxy.
These beings with wings were dubbed Draegona by the Andromeda Galactic News (AGN) articles, due to the rumors of the humanoids suddenly sprouting angel-like wings, and eventually transforming into full-fledged dragons before rampaging across entire planets and star systems.
From time to time, these beings would show up in force and fight amongst themselves and with the inhabitants of any unlucky planets caught in their path. Wherever these powerful creatures would show up, mass deaths and destruction would befall any world unfortunate enough to become a battlefield for these monstrosities.
The year is now 3252, and it has been roughly 20 years since the latest news of these planet-sized battles. The Sullivan family rests easily on their farming homeworld of Keto. Vikta and Andrea, along with their son Echo, live a happy and productive life until an old enemy from the past catches them off guard.
Fate is unkind to those who run from their destiny…