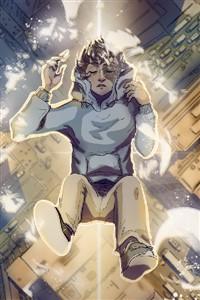 I'm terrible at synopses.
Touch is a story about a boy named James, and his friends, a group of young, superpowered people brought together by trauma; all trying, in their own ways, to come to terms with what that trauma means to them, and who they want to be in response to it. This is a learning process, and mistakes are made, but they grow, learn, and adapt to these difficulties in ways that some might say only young people can.
While it may look it at first, this is not intended as a sad story, merely an honest one. I wanted to make the characters human, and unfortunately, that means that difficulties hit them in very real ways through the story, but then again, they have some equally human moments of warmth between one another as they grow.
Triggers: Explores the aftereffects and recovery process of sexual abuse, and some other forms of physical abuse. I like to think I avoided making it edgy, but you deserve to be informed. Some readers have told me that it can feel a bit too real at times. A bit too honest.
If you like what you read, a more updated version can be found at touchwebserial.com