The transmigrated Emperor Of Mankind is a hikikomori girl? 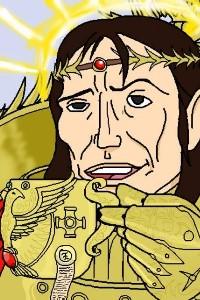 Mankind spreads across the galaxy as the dominion of the Emperor Of Mankind! Everything is going nice and all, but, BAM! Horus, favored son of the Emperor himself, somehow got corrupted by the power of Chaos, began to betray the Emperor and the rest of Mankind, moving his legions of corrupted troops to strike at the back of his father! One thing after another, after their duel at the climax, Horus died, the Emperor did not fare better, staying half dead, connected to a life support device for eternity until he decides to wake up. Is that the end? It was supposed to be so, but...

"where am I..."
The girl slowly opened her eyes and muttered... then froze up for a good 5 seconds.
'Wait... what happened...? WAIT, SOMETHING DID HAPPENED. WHAT THE HECK!? EH!??? FOR REAL!??? EHHHHHHHHHHHHHHHHHHHH!?????"
~
This is the tale of a transmigrated legendary being, the respected, powerful God Emperor himself, inside the body of a good-for-nothing-but-pretty college girl! How will the 31,000 years-old being, all by himself (herself) copes with society, school, peoples at least thirty thousand years younger than him (her) and his (her) similarly weirdo family?

(The content of this novel could be intentionally confusing or not, as it is a project that just kind of happened after the author went through a 20 hour web novel binge reading marathon without any coffee)