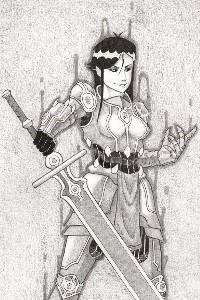 An unusual party of self-righteous vigilantes, seasoned killers and conflicted souls gathers around a mysterious warrior priestess on her way to the end of the world. While their past remains their own, the future of these men and women now rests in the hands of a sinister creature endowed with the smile of an angel, the heart of a demon and the strength to tear apart them both, should they dare to challenge her.
Whatever lies beyond remains to be seen, but with the known world drowned in blood and endless warfare, the promise of a fresh start seems alluring to those who have grown tired of it all. And it helps that the priestess has a way of convincing people that they want to help her.
All that she requires in return is their loyalty. Until death... and sometimes beyond.
A good commander can inspire his people to greatness, but it takes a truly great one to inspire strangers. Likewise it requires a just and compassionate leader to rule an empire, but a ruthless one to create it.
REND is set in the same universe as my other story, but there will be a lot of lore changes. Still, The Better Side of Evil is going to remain up for the time being as I feel it deserves to stay around for those who might want to check it out. Art by Shane Pierre: https://007access.deviantart.com/