Legend of the Empyrean Blacksmith 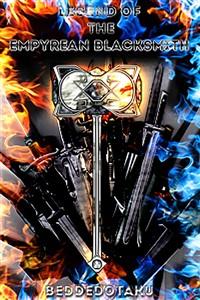 LEGEND OF THE EMPYREAN BLACKSMITH
After being kicked out of the orphanage due to turning 15, Lino finds himself stranded on the streets. With motivation to become the best blacksmith in the world, he seeks to become a disciple of the Bridge Village's best blacksmiths, only to be kicked out of all of them. He soon finds himself roaming the streets aimlessly on an empty stomach, jobless, peniless and homeless. After hiding himself in an alley when night fell, the reality finally catches up to him - he was truly alone.
Yet, morning come, he is greeted by a knee of an old man who, after beating him for sleeping in the old man's 'backyard', takes him in. Finally being given a helping hand, he clutches tightly onto it, becoming the old man's disciple and learning the ways of the crafting, naturally while flirting with the old man's wife in his free time.
Little did he know that this encounter would spark an adventure that would take him to the heights he never believed even existed, and would let him meet people he'd only read about in the books. It's a story of Lino - an orphaned child who would come to be known by many names, but only one that he'd ever truly accept: Empyrean Blacksmith.