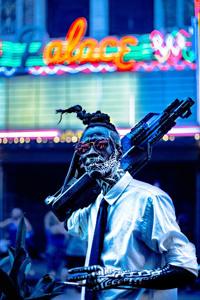 Oil has run out, and the tech companies reign supreme.
In this possible future corporations are more like governments. The comedy action thriller has a young man called "Joe Blogs" as the protagonist.
Due to seemingly an unfortunate error he has had all his information reset in his virtual citizenship loyalty account. Thus, he is now regarded as an infant too much for the system and his veteran pass to university has been revoked.
As he takes advantage of the system, people take notice of him. Eventually spiralling out of control until his only choice is to work for the corporations against each other.
Stealing their tech, and even gathering an AI companion he is forced to do battle against the corporations just to survive.
But whose twisted plan has he fallen under, and what is their outcome, read more to find out!