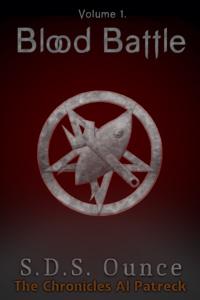 On an alien planet, in the city of Al Patreck, Edwhite Avarez and Tedet Galieta run a space shuttle repair Worksop, but their daily normal lives are interrupted by supernatural events. Edwhite is an official Wizard, with enough magical brawn to destroy anything in his path, but lacking the flexibility to wield his magic efficiently and harmlessly; he is willing to push himself to save his family and friends and incapable of hurting other mortals. Tedet is a self-taught Alchemist, from the intelligent alien species Radera born on the planet Sovail, a taciturn yet lovable friendly person once you get to know him; he is willing to do absolutely anything to save his best friend, Ed, even at the expense of his or other's lives.
Edwhite is contacted by Uderach, an alien version of vampires, a Torviela, to give him an offer he shouldn't refuse. Together with Tedet, they search for Edwhite's lost nephew before the week is over, but they find themselves in the middle of a turf war between both versions of vampires. Lost family, kidnappings, vampires, torvielas, duels, war, conspiracies. Ed and Ted battle their way against blood leeches, for the sake of Edwhite's blood relative. Are they capable of surviving? And if they are, how far are they going for a goal Edwhite is hellbent on realizing, but that Tedet could not care less?
Follow Ed and Ted as they adventure through their loved and dreaded city of Al Patreck.
(Since the volume is mostly done, expect daily releases unless something extreme happens. The Chronicles Al Patreck will be a collection of short but interconnected stories.)