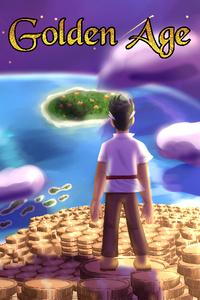 In the latter half of the 21st century fully immersive virtual reality has finally become mainstream; a brand new game company called Aurum Productions promises to bring about the most realistic fantasy MMORPG ever created with their flagship title, Golden Age.
A new player who goes by the name, D0n, loads into the world of virtual reality for the first time in his life thanks to these promises. But what catches his attention isn’t the wild monsters, the in-depth quest lines, or the ability to perform superhuman feats — what draws D0n at first is a bit more… mundane. Sure he’ll put in the time to level up his character… just as soon as he can finish applying the last layer of paint on his new coffee table… and after he lands that triple backflip he’s been trying to do all day… not to mention the lady next door was talking about a new horned rabbit stew recipe she was working on…
Sure a world of swords and magic in virtual reality means a whole slew of fantastical experiences you can’t get anywhere else, but it’s not like those are going anywhere. And virtual or not, D0n is determined to live out his reality with a pace and vision that suits him best. It’s just a shame that his habit of a personalized play style has some far reaching consequences even Golden Age’s dev team could have never predicted.