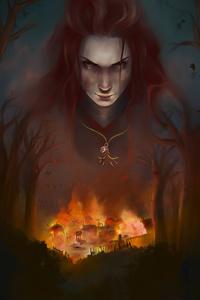 First Book in the Loremaster's Journey. It will be further split into two books going over the pre-Naruto timeline to end of Shippenden. The world, while retaining many aspects of canon, has many alternative explanations, and new events, with things developing quite differently at times.
Naruto Canon Divergence (yokai, spirits and 'gods', heavily expanded upon world and lore, experimentation and research into topics, far darker timeline, heavy and twisted themes, character development, slow progression, slow burn, slow building, 'saving'/collecting broken people to use as meat shields and friends etc)

Rotten Leaves (Age 3-15 or Naruto timeline)
There are accidents, and then there are accidents. Unfortunately for Konoha, instead of getting an obnoxious, bubbly blonde with Clifford the Big Red Dog shoved into his stomach on October 10th, they instead got a rather twisted indiviual. While the events of that night are covered in mystery, Kurama was effectively gone and in it's place was a young yokai child who was as oblivious and hungry for attention and love as Naruto was.
Death can cure many things, including being foolishly naive.
October 10th had taken much from her: her own timeline and loved ones, her personal memories of them and her past lives scattering like dust in a gentle breeze when she tried to recall them, and her own abilities and powers locked and hidden from her being what broke the camel's back. In exchange, she retained the knowledge of canon (that very quickly spirals out of control and even her calculations outside of set events), the entire village's animostity and fear (for as much as she appeared to be a human girl, she couldn't control her abilities and her inhuman aspects appear when emotionally charged), and those who didn't fear her tolerated or even planned to use her.
Arashi, being no fool, could see the writing on the walls, and decided to bail on Konoha with her fellow orphanage survivor Kabuto. Much to her displeasure however, a man who was thought long dead returned to Konoha starting a chain reaction as the world makes far less sense and the festering heart of Konoha is laid bare.
While this did cause some issues in her plans, it would allow her far greater access to corrupting, she meant saving, others. It changed nothing as Arashi had her mind set on returning home...to Ame.
In a world filled built on myths and legends, and where the clans with Bloodline Limits descended from divine (ascended mortal) or yokai lineage, there are far worse things than human villages waiting in the dark. Forgotten secrets haunt ruins left in the wake of Humanity's Rise. Old legends come true as creatures and monsters walk among humans. Surviving deities stir and forces working in the background make their moves, and all Arashi of the Nine-Tails can hope to accomplish is to survive.

Note: I will be updating 2-4 times a week and between 1-4k words for each chapter. The chapters will be placed in arcs, though there will be stand alone chapters as well. These will be longer than others.
The current scheduling will be on Mondays and Wednesdays for certain, with the occassional additional chapter.